skip to main | skip to sidebar

Making do in the kitchen: substitutions are my friend 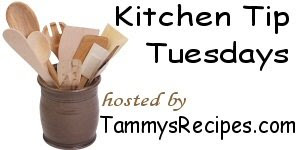 I am a big fan of making do with what you already have in the kitchen. Partly out of necessity (hubby has our car during the week) and partly because it lets the creative juices flow freely! Not only that, but it has the potential to save time and money when you put a stop to the frequent trips to the store.

Recently a friend from church blessed us with two large zucchinis. One is big enough that it may qualify as a small housepet (shhhh...don't tell our landlord:). We were also out of baking powder for almost a week. Using a great "making do" tool, allrecipes, I decided to look up muffins that didn't call for baking powder. Most of the recipes that came up were some form of the "morning glory" muffin, which is a favorite of ours. Unfortunately we were out of several of the important ingredients for those too! 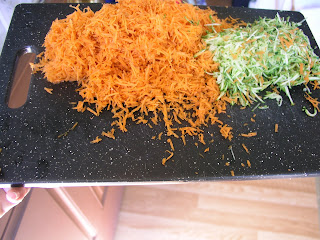 Here's where the creative juices start flowing: use those substitutions! Once you start to learn some basic principles on substituting (i.e. baking soda cannot be subsituted for baking powder by itself, but the opposite is sometimes true) you can go a little crazy. That's where I am, a little crazy:)

Here's where the muffin recipe comes in. I loooove morning glory type muffins (carrots, raisins, apples, nuts, coconut...etc. etc. etc.) make a delicious and satisfying breakfast that packs in a lot of nutrition. The things I don't like about them: often loaded with sugar, fat, and require ingredients I don't keep stocked at all times.

When I was thinking about making these the other day I was out of coconut and apples, not enough to deter from making these. What I did have? Zucchini! The coconut would just have to be omitted this time.

I also decided to subsitute 3/4 of the oil with applesauce (which actually turned out fine...they were very moist) but I rarely would reccommend leaving out all the oil, the texture is very different w/o any oil. The zucchini was great! I ended up added some additional flour because the zucchini shreds contain more moisture than the apples would have. I reduced the sugar somewhat, but I think that was a mistake. I should've added back at least the called for amount of sweetener (honey or agave would've worked as well) or another idea that might work well would be to increase the amount of raisins. They add a pop of sweetness that helps to carry a low sugar muffin very well. A tip I read about when making a similar muffin from Vegan with a Vengeance was to put the raisins in a cup of boiling water for a few minutes. This brings out the sweetness and helps keep the raisins moist in the recipe.

What I ended up with was an almost-great (I am tweaking the recipe more today...and will post it soon!) healthful muffin that used up what I have on hand.

For more kitchen tips, visit Tammy's Recipes!
Posted by Rachael at 8:18 AM

Great post!
I do substitutions all the time. I never seem to use a recipe just straight across. :) Using what you have on hand really is the best frugality! :)

I love to make creations based on what I have to use up. It is a very fun challenge. In the 5 years of marriage, we only threw 1 meal out and opted for fast food instead. :)
Marie

I usually use substitutions. I have had one bad experience so far.
Being half Itialian I cook by taste but have to watch the spices when getting creative LOL. That what the bad experience was LOL

Partner with The Crosby Family as we serve in Senegal with SIL.

Partner with The Crosby Family as we head overseas to Cameroon with Wycliffe Bible Translators.